PCDForum Campaign V: Challenging the story that the Wall Street economy is an engine of wealth creation essential to the prosperity and vitality of the nation.

[See the The Forum and the Economic Story Revolution] 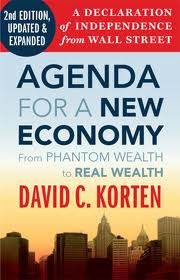 The New Story: The Wall Street economy produces nothing of value, fulfills no need not better met in other ways, and is corrupt beyond repair. Our economic, social, environmental, and political health depend on replacing it with a new economy in which life is the defining values and the money system is democratically accountable and responsive to community needs and values.

The Wall Street crash of September 2008, pulled away the veil of obfuscation to reveal the utter corruption of Wall Street and the monumental self-righteous arrogance with which its principal players denied personal responsibility for the resulting devastation. Public outrage opened a window of opportunity to engage a broader discussion of issues relating to the system of money and finance that for most people had previously seemed esoteric and of little relevance to their personal concerns. Politicians of both parties, however, responded with efforts to revive and repair Wall Street with trillions of dollars in public funds.

The Libertarian Right argued for allowing the Wall Street banks responsible for the collapse to fail, w
hich would have caused virtually all of the money that exists only in the computers of the banking system to instantly disappear and brought virtually all economic activity to an immediate stand still.

The Forum responded with Agenda for a N 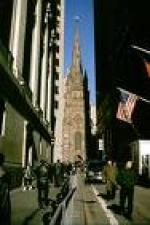 ew Economy: From Phantom Wealth to Real Wealth. Why Wall Street Can’t be Fixed and How to Replace It.  Written and published in a record two months, Agenda launched on January 23, 2009 at a national theological conference in the historic Wall Street Trinity Church located at the head of Wall Street. It outlined a plan for an orderly transition from a global phantom wealth Wall Street money system to a locally-rooted and democratically-accountable money system controlled by real people and responsive to the needs of the real wealth Main Street economy.

Simultaneously, the Forum joined with John Cavanagh and the DC based Instituted for Policy Studies to initiate the New Economy Working Group (NEWGroup) to further develop and popularize the New Economy framework as defined by the Forum, YES! Magazine, and the International Forum on Globalization’s report on Alternatives to Economic Globalization. Our intention was to develop and advance a coherent, holistic policy agenda for advancing the transition. An updated and significantly expanded 2nd edition of Agenda for a New Economy  with more fully developed policy agenda, including a more advanced and practical plan for a living wealth money system. launched a year and a half later in June 2010 as a report of NEWGroup.