Order of the Sacred Earth – Foreward 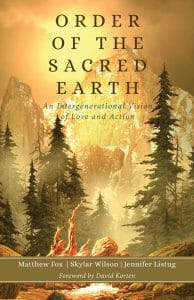 Order of the Sacred Earth, by Matthew Fox, Skylar Wilson, and Jennifer Listug, will be released to the public in July 2018.

David is honored to have been invited by Matthew Fox, his long-time friend, colleague, and spiritual teacher, to write the Foreword to this book. The excerpt below is shared, with permission, as part of the launch of the Order of the Sacred Earth community.

“I promise to be the best lover and defender of Mother Earth that I can be.”

Might this sacred pledge required of those who join the Order of the Sacred Earth save humanity and our Earth Mother? It is surely worth a try.

Individually, we are powerless against the forces of death wrought by human greed and violence in humanity’s ultimately self-destructive war against life. Only by acting together as lovers and defenders of our Earth mother will life prevail.

If you are drawn to this book, you likely know that our human relationship to Earth is in urgent need of serious healing. Eco-anxiety—a chronic fear of environmental doom—is surfacing as a reality-based, pervasive psychological malady.

I now commonly encounter people asking the ultimate question: Has the relationship between Earth and humans already passed beyond the point of no return?

Given rapidly growing climate instability, species extinction, and depletion of soils, fresh water, forests, and fisheries, there is good reason to believe it has. If we accept that conclusion, however, we turn our fear into a self-fulfilling prophecy. The more responsible choice is to act with urgency, wisdom, courage, and love as mystic warriors in the cause of life and living Earth.

I am thus drawn to the call of Matthew Fox—my longtime friend, colleague, and spiritual teacher.

The essays and reflections that Matthew Fox, Skylar Wilson, and Jennifer Listug bring together in this book hold true to their promise to prospective members of the Order of the Sacred Earth of an open, creative process of inquiry, love, and action. But the diversity of perspectives can be confusing. As I read the book, I found myself asking, “What’s the point? Out of these readings, what am I expected to believe or do?”

Yet by the time I reached the end, I had begun to see the wisdom of the open, emergent process that Matt, Skylar, and Jennifer are advancing. They are inviting all seekers of peace, truth, love, and healing—irrespective of past loyalties and affiliations—to join in the common cause of healing Earth guided by an emergent understanding of what Matt calls Creation Spirituality.

… Does Earth exist for us?
Or do we exist for Earth?

Clearly Earth existed and evolved as a living superorganism for billions of years without need for humans. Post the arrival of modern humans, we lived at peace with Earth for many thousands of years. Ultimately, however, a combination of arrogance and advanced technology led us to become deadly disrupters of living Earth’s capacity to create and maintain the conditions essential to its own existence as a living being.

For nearly a hundred years, our predominant human relationship to living Earth has been that of an invasive species that threatens the life of its host. Healthy living organisms characteristically mobilize to exclude and destroy invasive species. Earth may be doing exactly that as it unleashes hurricanes, droughts, floods, and wildfires.

And now we are learning of how, as the permafrost melts and the oceans warm, Earth is adding its own release of sequestered carbons to further threaten human survival even though this ultimately threatens Earth’s own survival as a living being. It is not so different to what sometimes goes amiss within our own bodies in their struggle to defend against invasive organisms.

Earth may now need the positive potentials of human intelligence and agency as much as we need Earth. It needs us, however, as healers and protectors— in stark contrast to our current roles as conquerors and exploiters. Getting it right will be an ultimate test of our human intellectual and psychological competence and agility.

We have assumed that Earth exists for us. But we are now learning that we exist only as part of Earth, and that it may need our help to restore its healthy function as much as we need it.

[I]f any possibility remains that we humans might get it right, let us not go quietly.

If we are to hold any hope of a positive outcome to the disaster we have wrought, it surely begins with an expression of our human love for and commitment to the Sacred Earth we now so badly abuse. Our failure to contribute to Earth’s healing might well bring an end to Earth’s distinctive contribution to Creation’s journey. The ill-conceived solutions of geoengineers compound our past arrogance and may only hasten Earth’s transformation into a dead rock.

Ultimately, other planets may bring forth carbon-based life that evolves to create conditions essential to more complex and able organisms— perhaps even human-like species. Perhaps one among them will acquire greater wisdom and avoid our failure of arrogance.

Yet, if any possibility remains that we humans might get it right, let us not go quietly. We are an intelligent, self-reflective species with powerful communication networks. This gives us the capacity to learn, to change, to perhaps become a healer to the Earth we have so abused. It begins with our pledge to be healing lovers and protective warriors.

The founders of the Order of the Sacred Earth ask only that we pledge to love and defend. Beyond that, it is up to we who take the pledge. There are implications for every aspect of our daily thought and action as we advance a transformation of the failed institutions that currently make it so difficult to live in responsible relationship with one another and Earth’s community of life.

So, what do we do beyond the pledge? Only together can we hope to find the answer.

(Excerpted from the Foreword by David Korten)

Sacred Earth, a New Economy and the 21st Century University

Sacred Earth, a New Economy and the 21st Century University