Part III: Natural Succession and the Step to Maturity

An accelerating rate of social and environmental failure attributable to the dysfunctions of the suicide economy suggests that the future of humanity depends on achieving a rapid and peaceful transformation from a global suicide economy to a planetary system of living economies. Human history offers no precedent for a transformation of culture, institutions, politics, and technology of comparable scope and speed. Indeed, the presumption that such a transformation can be achieved in the time remaining before irreversible social and environmental collapse is arguably ludicrous. Yet the consequences of failure could well prove to be so devastating as to be wholly unacceptable to any sane person.

Perhaps we might draw inspiration and insights from some of the more extraordinary examples of life’s transformative power that are products of the capacity and wisdom acquired through billions of years of evolutionary experience. The rapacious and earthbound caterpillar that emerges from its cocoon a beautiful and frugal butterfly with possibilities beyond the caterpillar’s imagination is but one such example.

Each human body offers an even more extraordinary example. Consider the miracle of two single cells so small they can only be seen with a microscope, one a human sperm and the other a human ovum, that join in union to grow into being in a mere nine months a human infant that within another two decades will become an organism comprised of trillions of interdependent cooperating cells with the mental and spiritual capacity to explore and reflect on the deep mysteries of cosmic creation with awe and wonder, contribute to the creation of great civilizations, and make a conscious choice to participate in the healing of the planet’s living systems. For six billion plus of these extraordinary beings to accomplish a cultural and institutional transformation of their cultures and institutions over a span of say twenty five years seems —  by comparison to the wondrous miracle accomplished by these two simple, yet committed and visionary cells — almost leisurely and mundane.

Then there is the example of an ecosystem — nature’s equivalent of a human economic system — self-organized by trillions of individual multi-celled organisms to collectively capture, transform, and exchange the energy of the sun and the material substance of the earth to support their collective reproduction and sustenance. As an ecosystem matures it transforms both itself and its physical habitat, demonstrating along the way an extraordinary resilience to disruption. There is much to learn from the wisdom of billions of years of evolutionary experience embodied in these natural economies.

The process by which a new forest ecosystem evolves from colonization to maturity is particularly instructive. It may begin with a traumatic event, such as a clear cut, fire, tornado, or volcanic eruption, that seriously disrupts or destroys the living systems previously in place. Life acts almost instantly to re-establish itself. Aggressive, footloose, fiercely competitive pioneering species soon arrive to colonize the denuded space, build soil fertility, and create conditions suited to the more patient, cooperative, frugal, and deeply rooted species that will comprise the permanent, resource-efficient, living-community to come. 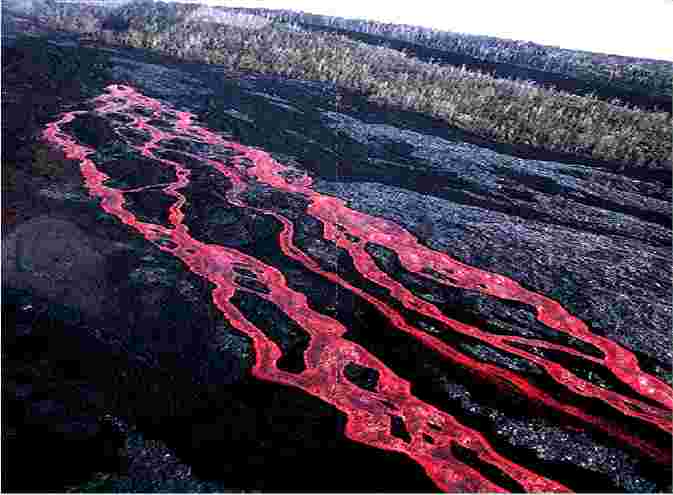 One of the more extreme examples of disruption is a lava flow that leaves behind a surface of solid rock completely barren of life. Among the first colonizers to arrive are lichens that attach themselves to the rock, hold moisture, and secrete acids that help to erode the rock into soil. The lichens are followed by various nitrogen-fixing bacteria that build the soil’s fertility. Then come mosses, fungi, and insects followed in turn by annual plant species and grasses such as ragweed, fireweed, and crabgrass that send down roots to pull up water and nutrients that they convert into organic materials that die and decompose into fertile humus.

Ecologists call this a Type I ecosystem. It is characterized by limited diversity, short life cycles, high energy loss, and limited recycling of nutrients. The more successful species in this stage tend to be opportunistic, competitive, fast growing, prolific breeders, and relatively insensitive to 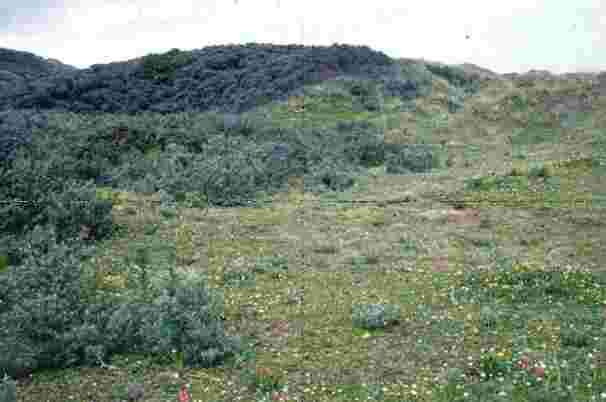 feedback from their often harsh environment. They require substantial energy per unit of biomass to extract from infertile matter the nutrient material required to support their rapid growth. Consequently, Type I species are able to survive only in open areas with direct sunlight. Because of their short-life cycles, they yield back to the environment a large supply of decaying biomass that becomes home to countless microorganisms that turn it into the rich living soils needed by the more settled species that will ultimately shade out and displace the more transient and opportunistic species that prepared the way.

The colonizing species have little loyalty to place, for their survival depends on constantly finding new patches of exposed, infertile land to colonize. Their lifestyles are rather like those of the footloose cowboys who populated the open frontiers of days now past, always moving on in search of new open spaces when things got crowded.

As the competition for sunlight increases, the initial colonizing species give way to the longer lived perennial berry bushes and woody plants of a Type II ecosystem. Type I species devote their energy to producing millions of seeds. Type II species direct more of their energy to producing hardy roots and sturdy stems that will see them through the winter and give them resilience in times of climatic stress. Come spring the perennials launch a new growth phase that picks up from where they left off the previous fall, reaching further toward the sun and deeper into the earth to gain advantage over the newly germinating seeds of the Type I annuals that they gradually displace. Type II species are not necessarily 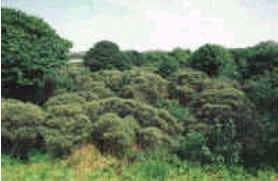 more fit than Type I species in any absolute sense. Each is suited to the conditions of a particular time and place in life’s larger, ultimately cooperative, scheme.

The first trees to appear are fast growing species that thrive in more open spaces with ample sunlight. As they increase in number and height, they form a forest canopy that reduces the light reaching the forest floor and fundamentally modifies the environment in which they grow. The light loving, fast growing perennial herb and shrub species that crowded out the grasses now give way to other perennial species better adapted to low light conditions under the growing forest canopy. Even the offspring of the fast growing, light-loving tree species that created the canopy now find it difficult to gain a foothold. With less direct sunlight, the habitat near ground level becomes cooler and more humid — conditions favored by the seedlings of slower growing trees able to tolerate low light levels.

The succession process continues until a mature, complex, and stable Type III living system emerges rich in the diversity of species living in a balanced, mutual relationship with one another and their physical setting. In contrast to the cowboy like lifestyles of Type I species, the lifestyles of Type III species are suggestive of those of astronauts crewing a spaceship on a very long journey.

The long-term viability of the Type III ecosystem depends on species able and willing to establish relationships of mutuality or partnership with one another and to share the resources of their ecosystem as they cooperatively create and maintain conditions essential to their collective health and vitality. Through constant experimentation, adaptation and accommodation they learn together to optimize their shared use of the rainwater and solar energy that are the only external resource inputs to the living system on which they all depend. Species diversity is high. Life cycles are often long and complex. Energy and nutrients are continuously recycled among species as the wastes of one become food for another. 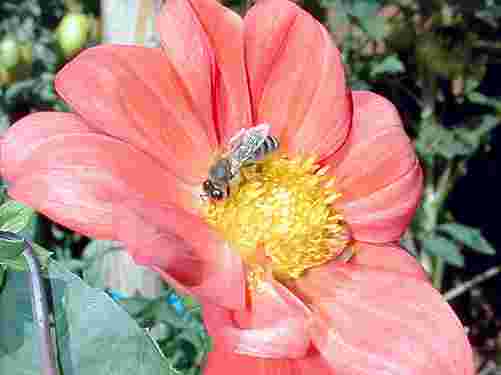 The succession process and the exquisite balance and stability of the mature Type III system illustrate life’s extraordinary capacity for mutuality, innovation, and self-organization.  Each individual of each species acts independently within a complex web of interdependent relationships to realize the ever expanding potential of the whole. Each responds to the information feedback provided by its surroundings to create interlinked patterns of adaptation and negotiation that hold competition and cooperation — and the interests of individual and community — in creative tension and dynamic balance.

Competition has its place, especially in the pioneering stage, including in the process of displacement of the more aggressive, competitive, fast breeding, transient, and profligate species by more patient, cooperative, slow breeding, settled, and frugal species that is central to achieve system maturity. Yet the deeper theme is one of a fundamentally cooperative process of system maturation moving toward stable relationships of mutuality.

The most extraordinary part is the absence of any central authority or centralized information processing facility. Nature has no equivalent of the modern state or the global corporation with their top down hierarchies of coercive control. Nature does not waste precious resources on maintaining ruling hierarchies and expends energy on competition only to the extent that it is necessary to maintain system vitality.

The analogy of succession and displacement in a forest ecosystem to the processes by which the culture and institutions of living economies might ultimately succeed and displace the culture and institutions of the corporate global economy is only partial. In the latter case we are not dealing with species of living organisms, but with varied species of enterprise — ranging from those that are locally owned and function within larger webs of life-serving community relationships to the far extreme of global corporations with absentee owners that function as extensions of a predatory financial system that values only money. Unlike the Type I ecosystem, which creates living capital from inert matter and solar energy, the suicide economy is a predominantly disruptive force engaged in the consumption rather than the creation of living capital.

Yet there are instructive lessons. Succession in a forest ecosystem involves the displacement of one emergent system by another. The suicide economy is an emergent system comprised of cancerous species of enterprise. Living economies are emerging as competing systems comprised of life-serving enterprises. Life’s accumulated wisdom is embodied in the planet’s natural systems and we do well to draw on that wisdom to strengthen and accelerate the succession process we must now intentionally advance.

Global corporations have proven to be powerful institutions for colonizing the planet and appropriating its resources to human use. They are formidable competitors and will not easily give up the ground they have claimed. Their time, however, has passed, for they have reached the limits of the earth’s tolerance for their profligacy.

Nature has in response given the human species a harsh and non-negotiable ultimatum. Free the earth of this institutional cancer and take the step to healthy species maturity — or make way for the emergence of new species of greater wisdom and maturity.

Back: Corporate Pathology    Next: Awakening Consciousness