The term Earth Community comes from the Earth Charter, a declaration of universal responsibility to and for one another and Earth. The process of its drafting began with the Rio Earth Summit in 1992 and carried forward through a multiyear collaborative process involving hundreds of organizations and thousands of individuals of diverse religious faiths, cultures, races, languages, and nationalities.

Native Hawaiian and cultural translator Puanani Burgess shares an indigenous perspective on the underlying values of an Earth Community vision and agenda.

The Earth Charter elaborates four overarching principles of Earth Community: (1) respect and care for the community of life; (2) ecological integrity; (3) social and economic justice; and (4) democracy, nonviolence, and peace. It calls for a reintegration of humans into the planetary system of life and requires the birthing of human cultures and institutions that embrace and nurture material sufficiency for everyone, honor the generative power of life and love, seek a balance of feminine and masculine principles, and nurture a realization of the mature potential of our human nature.

An Earth Community society will feature balanced relationships between people, people and nature, and between individual and community interests. It will look rather like most people’s vision of a healthy society before advertisers started messing with our minds and values to create a culture of material excess.

Imagine a time machine has projected you into a future in which Earth Community prevails. You find yourself in a world of culturally vital middle class communities nestled together in the midst of lush farmlands and natural habitats. You send back the following report:

People here live in compact communities in modest, but comfortable energy efficient multifamily dwellings that run primarily on wind and solar power. Most live within walking or bicycling distance of their paid jobs and the local independent stores that supply most of their daily needs. Motor vehicles are relatively rare with the exception of a few buses, taxis, and essential commercial vehicles.

There is no evidence of the grotesque, monotonous suburban sprawl so familiar to our time. An old timer relates that as the price of oil became prohibitive, people began to abandon the suburbs. As energy costs and climate chaos disrupted long-distance food supply chains and building materials became scarce, governments spent billions to deconstruct abandoned suburban buildings to salvage the materials and then removed the asphalt and rebuilt the soils to support organic farming, grazing, and timber production. Agrochemicals were banned.

The overall quantity of consumption seems to be far less than in our experience, but the health and vitality of children, families, and community life seems strikingly higher. As I travel around I’m impressed by the diversity of wild life, the healthy appearance of forests and waterways, and the fertility of the soils. 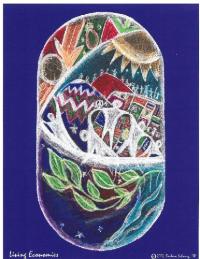 I find what appears to be a truly middle class society with only modest distinctions between the richest and the poorest in terms of income, asset ownership, size of residence, and consumption. Most families own their own homes and have an ownership stake in their local economy. Paid employment allows ample time for family, friends, participation in community and political life, healthful physical activity, learning, and spiritual growth. People seem to be using that time fully. Living from financial returns to passive investments, financial speculation, collecting rents, gambling and other unproductive activities is so unfamiliar that people are incredulous when I try to explain it to them. Their question is always the same. “Why would any civilized society tolerate anything like that?”

I get a similar puzzled response when I ask about crime and war. They tell me crime is rare. Some recall reading about war, terrorism, the arms industry, and outsized military budgets in history books, but they have no experience of such things.

The economists of these times measure wealth and well-being by indicators of the health and sustainable productivity of human, social, and living natural capital. Businesses are human-scale, locally owned, and dedicated to serving the people of the community and securing the well-being of its children for generations to come. I learned that publicly traded for-profit global corporations went the way of the suburbs. Those that produced useful products were broken up into their component businesses and sold to their employees or to the communities in which they were located. Others eventually went bankrupt and their intellectual assets were released to the public domain. Useful physical assets were sold in public auction.

In my conversations with people about their way of life, I am impressed by their evident commitment to being good neighbors, nurturing natural systems, and being a positive contributor to the community. Everyone I meet seems to have a meaningful and dignified vocation that contributes to the well-being of the larger community and fulfills their own basic needs for healthful food, clean water, clothing, shelter, transport, education, entertainment, and health care.

As I dig deeper, I find that intellectual life and scientific inquiry are vibrant, open, and ­dedicated to the development and sharing of knowledge and life-serving technologies that address society’s priority needs. I also learned that families are strong and stable. Children are well nourished, receive a quality education, and live in secure and loving homes. Rates of suicide, divorce, abortion, and teenage pregnancy are low. It seems that nearly everyone is involved in civic and political life. Perhaps the thing that most surprises me is that people seem to respect their politicians for their wisdom, integrity, and commitment to the public good.

This is what Earth Community looks like and it is within the means of all but a very few of the most socially and environmentally ravaged nations to achieve. Furthermore, the conditions described above align with the core values shared by both liberals and conservatives. If anything in this description sounds alien or utopian, it is probably because it depends on cooperation and sharing and will remain beyond the reach of the lone individual and of societies that recognize only individual interests and organize solely around the pursuit of individual financial gain.

Fortunately, there is nothing inevitable about extreme individualism and the obsessive pursuit of financial gain. Both are symptoms of social and psychological dysfunction for which Earth Community is the best cure. It begins with changing the stories that frame the culture, including the story that there is no alternative to Empire.

Much of the necessary work centers on bringing forth a New Economy grounded in living systems design principles.